A feminist is not someone who thinks she / he is better than someone because of his/her gender.

Im a feminist.I don’t hate men. I don’t think it’s a man’s fault that a woman has periods.

Feminism isn’t about telling the world how women would be better RULERS and how they know BETTER. I’m a woman and I will never say I’m better than a man..this definitely doesn’t mean I’m saying a man is better. I shall just stick with men and women are different and that’s okay.

I know its unfair for a woman to be paid less when she works equally as a man.Its something that needs to be discussed about and solved not just be considered a problem. You can bring in the sensitive issue of feminism there and invite your ‘non-female’ friends to support you because you are making a point. But if some of them think it doesn’t make much sense don’t be disheartened let them be. Sometimes something that means a lot to you may mean nothing to someone else and that’s okay. Don’t do things that will make them hate or fear feminists.

Its like the world has portrayed feminists as this group of rebellious women who are always protesting and holding signs that says ‘This is what a feminist looks like’. And also have the ‘I hate men because they are mean ‘attitude.

The thinh is you can look like yourself and be a feminist without any changrs you see.My  grandma is a feminist, My English teacher is a feminist, a lot of men and women I know are feminists but they don’t know it yet because they think they don’t fit in the criteria of one.

Lets face it there is no CRITERIA to meet to become a feminist. I would rather replace the word feminist with the word equalist If I could. The main thing you need to do is accept the difference between a man and woman and make people see the beauty of it.

A woman is more beautiful when appreciated; a man is more meaningful when respected. Men and women compliment each other’s existence in this planet there is no need to complain and compete based on your gender.

No Madam just because you have a vagina doesn’t mean you are worthy of my respect, you can’t ask for it anways you have to earn it.

I also don’t understand men who think they ‘deserve’ respect just because they are men. Wow ! Since when is testicles the trademark of respect ?

No sir just because you don’t have periods and you don’t know what its like to walk around when you are bleeding as if nothing happened doesn’t mean you deserve better. It definitely means though that you have to be a bit more sensitive and understanding to those who do that.I mean I know its normal for women to bleed 4-6 days a month but would you not freak out if that happened to you? Would you still consider it NORMAL?

Sometimes its uncomfortable being a woman in this world but isn’t it the same for a man too?

Your gender doesn’t carve out the kind of person you are it helps you to create your identity to a certain extent but definitely doesn’t define who you are.

To all those women who think its unfair to be a woman. The world is not fair for a man either.

Its just how it is why hate men for that?

So yeah basically I would replace the word ‘feminist’ with ‘equalist’ if I could. Not equalist because I believe men and women are equal but I believe that men and women deserve equal opportunities Feminist is not a bad negative word by the way and it has nothing to do with who is better or worse. Let’s just say we should accept differences more and let it add more to each other’s lives

And about who should rule the world? Nobody.

The world would be a better place if we let humans be..its never beautiful with the greed of power and authority but the  freedom of being .I don’t know if a man or a woman can rule it better so I would say I give both and everyone in between an equal chance…no one rules the world. No one runs it..you just live your god damn life.! 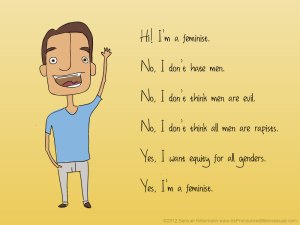